Showing posts from May, 2006
Show all

May 25, 2006
DISCLAIMER: The views expressed within this blog are solely those of the author and do not necessarily reflect the official policy, position, opinions or ideals of the U.S. Government, Department of Defense, U.S. Military or any of its affiliates. The author maintains legal rights to all posted articles and photos unless otherwise annotated by a sidenote giving proper credit to the source.
Post a Comment
Read more 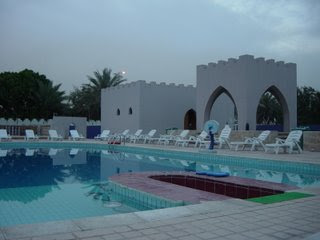 Swimming pool at Odai Hussein's former palace, Summer 2005 When American and Coalition forces plowed through Baghdad in early 2003, they left a significant path of destruction in their wake. The majority of the damage pinpointed military bases and bunkers, government buildings, and other points of tactical interest, as well as symbols of Ba’athist power and audacity such as ornate regime palaces and luxurious riverside mansions. A notable target of this architectural cleansing was Odai Hussein’s Baghdad palace where he harbored his pet lions. The lions were eventually transferred to the Baghdad Zoo and the palace, which was heavily damaged in the initial bombardment of Baghdad , was later leveled to the ground by a construction crew. Due to its close proximity to the U.S. Embassy (within walking distance) the palace grounds were transformed into a campground/living area for embassy employees and other U.S. civilian contractors operating in Baghdad . One feature of the
1 comment
Read more 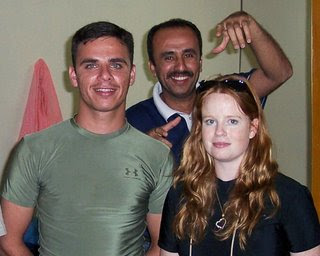 Mandi Matti, 22, Western Iraq (Two Iraqi men's names withheld for security reasons.) The following article was written after returning from my first trip to Iraq in the summer of 2005. I spent four months in Baghdad and other towns within the infamous Sunni Triangle as an active duty military service member. I longed to write about my experiences while I was in country but chose against it as I witnessed firsthand and heard the reports of numerous military members being chastized and punished by their chain of commands for the content of their blogs. I have recently separated from the military and am returning to the Middle East as a civilian non-combatant, hopefully able to operate within the full realm of freedom of speech. I did, however, want to share this article from my previous journey..... While sitting here at my desk struggling to find the perfect attention grabbing line with which to open this article, I focus my gaze upon the small silver ring I have been wearing
Post a Comment
Read more 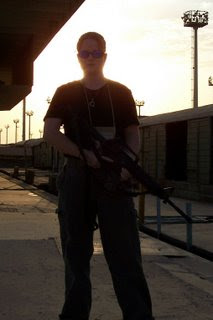 I'd like to welcome everyone to my new Blog! I will be leaving for my second trip to the Middle East in less than two weeks and will be reporting from there on what I hope to be at least a weekly basis. I will be researching daily life of the average Mid-Easterner and hope to better aquaint the world with the experiences and lives of those not captured by the CNN cameras everyday. Having recently separated from the United States Navy, I am now free to document and write about issues, observations and opinions that I was previously restricted from publishing. I am clinging to this oppportunity with both hands and feet and taking advantage of my constitutional right to freedom of speech which I temporarily surrendered six years ago when I raised my right hand and vowed to defend such rights as an active duty military service member. I hope you enjoy my postings and experience at least a shard of amusement and diversion. I do not expect any of my articles to dramatically change your
Post a Comment
Read more