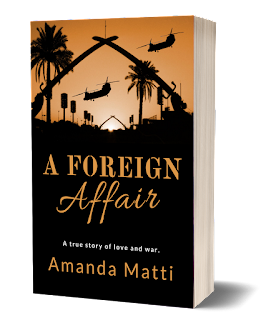 A Foreign Affair is a sweeping Iraq War memoir that chronicles the forbidden romance between a female U.S. service member and her Iraqi translator, who meet while serving together on the front lines of Operation Iraqi Freedom.

In the summer of 2005, U.S. Navy intel analyst Amanda Matti deployed to Baghdad to serve as a Foreign Affairs Liaison Officer within the new Iraqi National Intelligence Service. The INIS was established and overseen by the CIA, and Amanda’s mission was to help strengthen relations between the new Iraqi government and U.S. intelligence personnel. A few days after her arrival in country, Amanda was introduced to Fadi, who was assigned to serve as her translator for the duration of her deployment.

Over the next few months, Amanda and Fadi forged a close friendship while working round-the-clock together at the INIS building. Three months into Amanda’s deployment, she, Fadi, and a handful of others from their department were sent on a covert forward deployment to assist with intel collection and analysis efforts in western Iraq near the Syrian border – at the time, ground-zero of a bloody ongoing battle between U.S. military forces and foreign Al-Qaeda insurgents flowing into Iraq from Syria. While on the front lines, Amanda and Fadi’s relationship deepened and blossomed into love. Despite their stark differences, the two developed a connection that transcended culture, geography, and politics.

As Amanda neared the end of her deployment, she made the decision that once she returned to the U.S., she would find a way to get Fadi out of Iraq. Not only did she want to bring him to the U.S. because she was in love with him, but also because his life was in imminent peril as a direct result of his service to U.S. forces. Having spent several years working for the American military across Iraq and U.S. government agencies in Baghdad as a translator, Fadi wound up on Al-Qaeda’s hit list after his identity was leaked to insurgents. ‘Wanted’ posters with his name and photo were posted in Mosques across Fallujah and Ramadi offering a reward to anyone who delivered him to local Al-Qaeda leaders – dead or alive. He was forced to permanently move into the INIS building after returning home from work one evening to find a hand grenade sitting on his doorstep with a note wrapped around it stating that if he did not stop “working for the infidels,” he and his family would be killed.

Amanda knew she may have to choose between Fadi and her career, but she never imagined the hell that would soon become her reality. The day after her return from Iraq, Amanda was subjected to several days of intense interrogation by NCIS investigators who were convinced Fadi was using her to gain intel. They accused her of divulging classified information to Fadi, whom they suspected of having ties to terrorist groups. Convinced there was no possible way their relationship was genuine, NCIS ordered Amanda not to leave the immediate area and spent nearly a year trying to build a case against her – threatening charges that ranged from mishandling of classified information clear up to espionage.

Months into their investigation, NCIS still hadn’t produced a shred of evidence that Amanda had committed any chargeable crimes, or that Fadi had any ties to anti-American groups. As a last-ditch effort to emerge with a win, the NCIS agents dictated a confession for Amanda to write up, promising that if she simply signed it, they’d be able to close the case and, at most, she’d face minor military disciplinary action and then be free to move on with her life and career. Though just 23-years-old, Amanda had the wisdom to see through their ploy and promptly retained civilian legal counsel experienced in national security cases.

With Amanda now lawyered up in the states, NCIS moved on to Fadi in Iraq. Agents in Baghdad interrogated him on multiple occasions and pressed him too to write and sign a confession, doing their best to convince him that if he signed a confession all of Amanda’s troubles in the U.S. would disappear. “If you truly love her, you’ll do this for her…” To Fadi’s great credit, he sensed a trap and refused to sign anything, but as an employee of the INIS, he remained at the mercy of the Americans directly overseeing operations within the INIS – the CIA, who never lets an opportunity to manipulate a situation to their benefit pass them up.

Though Fadi had sidestepped NCIS’s attempt to guilt-trip him into a confession, the CIA Deputy Chief of Station, Max, still recognized Fadi had a weakness when it came to Amanda. Max managed to convince him that he alone had the power to make Amanda’s legal issues back in the U.S. disappear, but Fadi would have to do something for him in return. Max groomed and transformed Fadi into an asset and used him to track and gather intel on employees of the INIS’s rival agency – the Interior Ministry.

While the American CIA was building an intelligence network within the INIS, the Iranian government was doing the same within Iraq’s Interior Ministry. A covert shadow war soon broke out between Tehran and D.C. that raged in the streets of Baghdad. Shiite militias controlled by the Interior Ministry (essentially Iran) began kidnapping the predominantly Sunni INIS employees and interrogating and torturing them in secret prisons hidden across Baghdad. Typically, their bodies – riddled with holes made by power drills - would be discovered days later dumped in back allies and ditches. To counteract the Iranian-backed militias, the CIA and INIS formed armed task forces to gather intel and carry out special ops against these Shiite militias. Thus, a full-scale secular war erupted in Baghdad.

Within a few months, Fadi became a team leader on one of the INIS’s task forces. He was a uniquely reliable asset in the midst of a secular war as he was neither Sunni nor Shiite, but a member of Iraq’s Christian minority, born and raised Catholic. Thoroughly impressed by Fadi’s skills in both intel collection and tactical operations, Max pulled some strings to have Amanda’s NCIS investigation stalled back in the states so that he could continue to leverage Fadi. However, even though Fadi was skilled, the extremely risky missions he and his task force carried out soon landed him in one of the Interior Ministry’s secret prisons, where he was beaten and tortured. Typically, Max wouldn’t lift a finger to assist and would simply find a new “Fadi,” but even he wasn’t 100% sure Amanda hadn’t shared sensitive classified information with Fadi, so he couldn’t afford for Fadi to end up in the hands of an Iranian Intelligence interrogator. After some cunning diplomatic shuffling, Max secured Fadi’s release from the IM secret prison.

A few days after Fadi’s release, the NCIS case against Amanda was dropped and no criminal charges were filed. However, because of all the trouble she’d caused, the Navy issued her a non-judicial punishment, revoked her security clearance and kicked her out with a General Discharge. As soon as she was free from the Navy and criminal investigation, Amanda filed to bring Fadi to the U.S. on a Fiancé Visa. Two years later, Fadi arrived in the U.S. and the couple wed. Fadi and Amanda have been happily married for 13 years and live in San Diego with their two beautiful daughters.

For an added dose of irony, a few months after Fadi arrived in the U.S., he was recruited by the Department of Defense, granted a security clearance, and sent back to Iraq to serve as an advisor and translator, while Amanda remains classified as unfit for any form of Federal employment.

A Foreign Affair is currently available at Amazon and Barnes & Noble

Popular posts from this blog 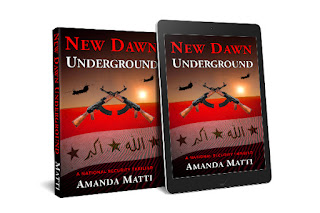 The COVID-19 quarantine has put the publishing of my latest book, NEW DAWN UNDERGROUND, on hold, so I have decided to start sharing chapters here on my blog to give my followers (all six of you - LOL) a jump on reading it for FREE! CIA analyst Elora Monro is devastated. Her Delta Force fiancé was just killed during a failed raid on a terrorist compound in northern Iraq. Now, Elora is hellbent on tracking down the mastermind behind the Islamic militant group responsible for her fiancé’s death — the New Dawn Underground. Posing as a Washington Post correspondent, Elora travels to the Middle East and embeds with the New Dawn militants under the guise of helping the group tell their side of the story to Western media. Driven by vengeance, Elora strives to gain enough intel while on the inside to destroy New Dawn from the inside out. Prepared to sacrifice her life to accomplish her mission, Elora is wholly unprepared for the enigmatic Zaidan Al-Sadiq, right-hand-man to the militant group’s
Read more 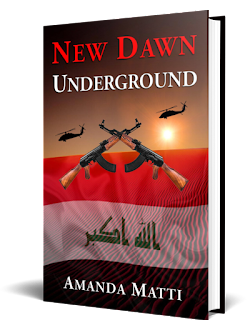 Chapter 1 CIA Analyst Elora Monro stood on the tarmac of Dover Air Force Base awaiting the arrival of a C-17 cargo plane bearing the remains of her fiancé, U.S. Army Major Brendan Jacobs. Her friend and colleague, fellow CIA Analyst Nick Hildebrandt, stood next to her. Nick had also been close friends with Brendan, he was even slated to be one of the groomsmen in Elora and Brendan’s upcoming wedding. Now, instead of marrying Brendan, Elora was burying him. She and Nick stared silently off into Delaware’s gray March sky—watching, listening. They heard a low rumble begin to approach from the east and looked up just in time to see the C-17 break through the cloud cover. As the plane dipped its wings to circle the airfield and line up for landing, Nick placed a supportive hand on Elora’s shoulder and gave it a gentle squeeze. “Are you okay?” “Nope,” Elora replied, feeling her chest tighten as she struggled to maintain her composure. Nick didn’t press further but kept his hand on he
Read more